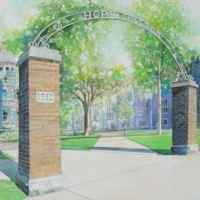 Watercolor paintings of the Hope College campus by Bruce McCombs, who is in his 50th year on the art faculty, will be the focus of an exhibition in the De Pree Art Center and Gallery that will feature two opening events on Friday, Oct. 19.

McCombs will deliver an artist’s talk in the gallery at 4 p.m., with a reception following.

The public is invited to the exhibition, the artist’s talk and the reception.  Admission is free.

The talk and reception are scheduled in conjunction with the college’s “Homecoming and Family Weekend: One Big Weekend” celebration, and the exhibition will reveal the discoveries that have resulted from McCombs’ daily journeys through Hope across nearly half a century.  It will feature primarily new work, but because the exhibition will be his last — since, having taught at Hope since 1969, he anticipates that he will retire before there can be another — he has also chosen to add a few favorites that he has never shown.

When McCombs is asked how long “it takes to do a painting,” the truth is that his whole process begins with walking, then seeing and photographing. After this part of the process he will spend days and maybe weeks sketching the underlying drawing before he is ready to paint, which may take three to seven days more.

Before he seriously took up watercolors during a sabbatical period about 25 years ago, McCombs worked on etchings for the first 20-plus years of his career. Each etching plate could take months of working-over to develop depth and transparency to create one of his many award winning prints.

Once he put down the ink and dry point, he transferred the method to watercolor painting, in a technique called glazing. He thins the pigment and repeatedly paints over an area to produce a transparency which cannot be achieved in one swath of opaque painting.

Hope’s ever-changing campus has provided intriguing subject matter for his work.  He has never ceased to find something new for a painting, whether it’s 10 degrees and snowing or a sweltering summer day. Some of those past works were displayed in solo exhibitions in the De Pree Art Center and Gallery in 2002, 2005 and 2011, and have also been featured on Hope College calendars and can be seen on the office walls of many of Hope’s buildings.

McCombs actively displays his prints and paintings throughout the U.S. and around the world. His artwork has been procured by many permanent collections both nationally and internationally, including the Fort Wayne Museum of Art, the Cleveland Museum of Art, the Whitney Museum of American Art, the Library of Congress in Washington, D.C., and the National Museum of Fine Arts in Hanoi, Vietnam.  He holds his B.F.A. from the Cleveland Institute of Art and his M.F.A. from Tulane University in New Orleans, Louisiana.