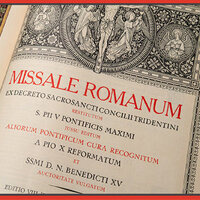 Catholic Mass in the Extraordinary Form

On Wednesday, January 29th at 7:30PM, the Saint Benedict Institute will host a Traditional Latin Mass in Winants Auditorium (Graves Hall, 263 College Ave., Holland, MI 49423) commemorating the Feast of Saint Francis de Sales, the patron saint of our parish in Holland.  The Mass will be sung by Gaudete Grand Rapids, a brand new professional choral ensemble dedicated to propagating the beautiful chant and polyphony of the Roman Rite.  They will be singing the Mass for Four Voices by William Byrd, motets by Anton Bruckner and Maurice Duruflé, as well as Gregorian chant.

This event is free and open to the public.

Gaudete Grand Rapids is a small, professional choral ensemble dedicated to performing perennial Latin liturgical music in the context for which it was written, the Traditional Latin Mass.  Director Jonathan Bading ('18) converted to the Catholic faith upon witnessing the Traditional Latin Mass in all its musical splendor, his main impetus for founding Gaudete.  While now a choir of 12, their five founding members recorded a promotional album, Woman, Behold Thy Son, which can be purchased at gaudetegr.bandcamp.com (digital and CD) or following Mass.  All funds will go towards supporting their first season, of which this Mass is the inaugural event.

Jonathan Bading recently shared his conversion story on the Journey Home.  You can watch his beautiful testimony here.