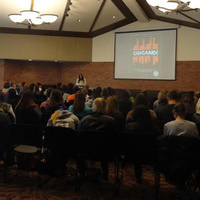 The public is invited to the lecture.  Admission is free.

Drawing inspiration from César Chávez and his own migrant worker experiences Gonzáles will highlight the richness of Chávez’ faith formation and leadership style to advance justice, social transformation and personal development.

The address will be followed by a food festival scheduled in honor of Chávez on Thursday, March 31, from 4:45 p.m. to 7 p.m. in the Phelps Hall dining hall.  Admission to the food festival is $6 for those not on the college’s meal plan, payable at the door.

Born in March 31, 1927, in the United States during the Depression, César Chávez became one of thousands of migrant laborers who looked for work in California. There he learned firsthand of the inhuman treatment, indignity, exploitation, and the lack of civil rights experienced by farm workers who toiled the fields without the protection given to others. Driven by lessons of charity and the abiding faith of his mother, Chávez used non-violent tactics to organize strikes, marches, promote community-making, and prayers to increase the nation’s awareness of the plight of migrant workers. Against the backdrop of wealthy farm owners, political opposition, police brutality and absence of civil rights, César Chávez employed the power of intentional leadership to create in 1962 the National Farm Workers Association, later to become the United Farm Workers, the first union of its kind for the protection of farm workers in the United States. Drawing inspiration from César Chávez and my own migrant worker experiences, Gonzáles will highlight the richness of Chávez’ faith formation and leadership style to advance justice, social transformation and personal development.

Gonzáles, who is retiring at the end of the school year after serving at Hope since 1979, has devoted his career to enhancing international and multicultural understanding.  He has received multiple awards locally, regionally and abroad for his service.

The second-oldest born into a migrant-working family, Gonzáles spent much of his youth traveling to farms between Texas and Michigan, with the family settling near South Haven when he was 17.  He worked while attending school, graduating from high school at age 20.  He was drafted into the U.S. Army shortly after enrolling at Lake Michigan Community College in Benton Harbor in 1968, serving in Germany, where he remained as a freelance photographer following his time in the military.

Gonzáles joined the Hope staff in 1979 as director of the college’s TRiO Upward Bound program.  He became director of minority student affairs in 1984, assistant dean of multicultural life in 1986 and assistant provost in 1990.  He acquired administrative responsibility for international education when he was named associate provost in 2001, and was appointed associate provost and dean in 2006.  He was instrumental in advising the college’s Black Student Union and in establishing the Latino Student Organization.

Among other activity beyond campus, he is a past chair of the City of Holland’s International Relations Commission, the Michigan Commission for Spanish Speaking Affairs and Latin Americans United for Progress, and a founding member of the Tulipanes Latino Art and Film Festival.

The Great Lakes Colleges Association honored him in 2009 as a founding member of its Committee on Institutional Commitment to Educational Equity.  In 2006, the city of Santiago de Queretaro in Mexico presented him with its “Germán Patiño Díaz” Medal for his role in creating the sister-city relationship between Holland and Queretaro and exchange relationship between the Autonomous University of Queretaro and Hope. In 1998, he received the “Michigan Outstanding Hispanic of the Year” “Honorable Mention” award from the Michigan Educational Opportunity Fund Inc. In 1997, through one of only 24 fellowships awarded worldwide by the Ford Foundation, he participated in the “International Seminar on Diversity Issues in Higher Education” in India.

Hope presented him with the Motoichiro Oghimi Global Courage Award in 2013 and the “Vanderbush-Weller Development Fund” award in 2004.

Campus sponsors of the address include the Office of Multicultural Education and Latino Student Organization.

The annual César Chávez Lecture Series at Hope College will feature the keynote address “The Legacy of César Chávez: Lessons in Transformational Leadership in the Service of Community” by Alfredo Gonzáles, who is associate provost, dean for international and multicultural education, and adjunct associate professor of social work at Hope, on Thursday, March 31, at 4 p.m. in the Maas Center auditorium.