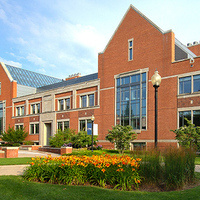 Abstract: Antibiotics are arguably one of the greatest achievements in medical science, yet their utility is slowly being eroded by the rise of antibiotic resistant bacteria. To combat this problem, new antibiotics focused on novel targets are desperately needed. Unfortunately, the pharmaceutical industry has divested from antimicrobial drug discovery leaving only small
biotechnology companies and academia to find the next generation of antibiotics. The Firestine laboratory has been focused on the discovery of antimicrobial agents targeting de novo purine biosynthesis and spore germination. In this seminar, we will discuss the unique biochemical
differences in purine biosynthesis in bacteria versus humans and efforts underway to exploit this difference in drug discovery. We will also discuss the challenges of C. difficile infections and our studies aimed at providing a drug to protect against this pathogen.

Biography: Steve was born in Kalamazoo, MI and attended the University of Michigan where he majored in chemistry. While at UM, Steve conducted undergraduate research in the laboratory of Dr. James Coward working on the synthesis of fluorinated leucovorin. Steve graduated UM with high honors in chemistry and joined the Department of Medicinal Chemistry and Pharmacognosy at Purdue University where he studied medicinal chemistry and biochemistry under the direction of Dr. V. Jo Davisson. His doctoral studies focused on the study of AIR carboxylase and his research
showed that this enzyme was different in microbes versus humans. Steve synthesized numerous nucleoside and nucleotide analogs including NAIR, which is the most potent inhibitor of AIR carboxylase known to date. Steve graduate in 1996 and conducted a Damon Runyon Walter Winchell Postdoctoral Fellowship in the laboratory of Dr. Stephen J. Benkovic at the Pennsylvania State University. Steve conduct research into protein engineering and the generation of artificial transcriptional switches. In 2000, Steve began his independent academic career as an assistant
professor of medicinal chemistry at Duquesne University in Pittsburgh, PA. There, his research focused on DNA bending agents as a mechanism to control gene expression. In 2005, Steve moved to Wayne State University and he was promoted to full professor in 2016. Since his arrival at WSU, Steve has been continuously funded by the National Institutes of Health where his
research has focused on antimicrobial drug discovery.