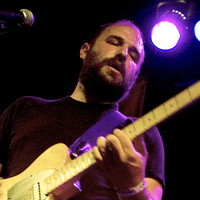 After a decade helming the project, he found himself embroiled in a major personal philosophical and spiritual cataclysm, wrapped in a growing drinking problem. Bazan got to work exorcizing both his demons and angels, ditching the Pedro moniker in favor of his given name and has since released several critically-acclaimed albums.

David Bazan was, for many years, the songwriter and driving force behind the acclaimed indie band Pedro the Lion, building a dedicated following and selling a few hundred-thousand albums based in large part on his extraordinary melodic sense and erudite, theologically-themed songs.

This song is off his first record I think its the first track. Since this video is shown only on this webpage I wonder if I could get in contact with the man that produced the video, what he shot it on. Because the audio is great I wonder if he had a analog audio input on his camera.