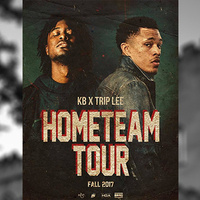 KB (Kevin Burgess) has three studio releases and won a Dove Award for Rap/Hip-Hop Song of the Year in 2014. His 2015 release, “Tomorrow We Live,” garnered both critical and commercial acclaim, earning a Stellar Award nomination for Rap/Hip-Hop Gospel CD of the Year and debuting on the Billboard charts as the number-one Christian Album and the number-four Rap Album overall.

Individual tickets for the concert are $18 for regular admission and $24 for a Fast Pass, and are only available online at ticketfly.com. Hope College students can purchase tickets for $10 at the Hope College ticket office in the Events and Conferences Office located downtown in the Anderson-Werkman Financial Center (100 E. Eighth St.). The ticket office is open weekdays from 9 a.m. to 5 p.m. and can be called at (616) 395-7890.

Hope Student tickets at a discounted rate and can be purchased ONLY in person at the Hope College ticket office and the discount is limited to the first 300 students. All other tickets can be purchased here.