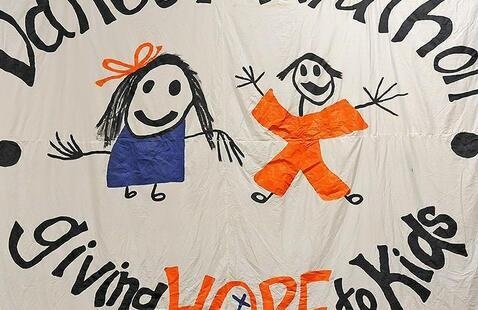 For a 20th consecutive year, hundreds of Hope College students are putting their time and talents into the campus-wide Dance Marathon fundraiser.

Organized by Hope students, the 24-hour event is conducted on behalf of Helen DeVos Children’s Hospital in downtown Grand Rapids, both to raise funds and to build awareness of the hospital’s work. It will be held at the college’s Dow Center, with the main portion of the marathon beginning with a kickoff celebration on Friday, March 8, at 7 p.m.

The total raised will be announced during a celebration that will begin at 4 p.m. on Saturday, March 9, as the Dance Marathon’s 5 p.m. conclusion approaches.

Members of the public are encouraged to observe at any point.  A variety of events have been scheduled to punctuate the marathon, including testimonies by families served by the hospital, various performances by student and local groups, and the popular annual lip-sync.

Activities on behalf of the marathon began shortly after the beginning of the fall semester and have involved nearly 30 student organizations. More than 950 Hope students will be participating in the March 8-9 Dance Marathon itself as dancers or morale boosters or in a variety of other roles.

To emphasize the children that the marathon exists to help, the Dance Marathon’s student organizers coordinate a variety of activities during the course of the school year to connect with families and children served by Helen DeVos Children’s Hospital.  In addition, each of the families is paired with one of the participating student groups.  Events this year included a cookout at Teusink’s Pony Farm in Holland this past fall; mini-marathons at West Ottawa High School, Zeeland East High School and Holland Christian High School; a Christmas party for the families in December; and participation in Project Night Lights outside of the hospital.

Students involved with Dance Marathon have raised funds for the effort in a variety of ways, from Homecoming Weekend’s annual 5K Donut Run; to writing letters to family and friends; to bake sales; to a trivia competition; to a community chili cook-off; to a competitive cornhole tournament; to a silent auction held at the Courtyard by Marriott Downtown Holland.

In recognition of the program’s efforts, Dance Marathon received the “Youth in Philanthropy Award” from the West Michigan Chapter of the Association of Fundraising Professionals in the fall of 2003.

In order to help support the vast number of children who visit the hospital each year, all proceeds from the marathon will go directly towards the funding of special programs that are designed to make the young patients’ visits to the hospital more bearable; helping the families of the children to deal with their illnesses; and supplies related to treatment and care.

Additional information about Dance Marathon and Helen DeVos Children’s Hospital, and about how to make a donation, is online at hope.edu/offices/student-life/dance-marathon/