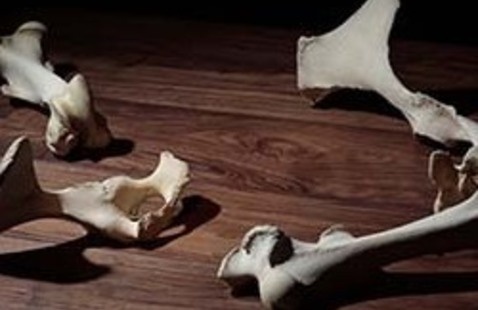 The African American experience during the Great Migration of the 20th century is reflected in the exhibition “(re)collection” by Chicago-based artist Nate Young, which will open in the De Pree Art Center and Gallery at Hope College on Monday, Jan. 6, and continue through Thursday, Feb. 6.

Young will deliver an artist’s talk on Thursday, Feb. 6, at 4 p.m. in Cook Auditorium of the De Pree Art Center, with a reception following in the gallery from 5 p.m. to 6:30 p.m.

The public is invited to the exhibition, artist’s talk and reception.  Admission is free.

During the Great Migration, millions of African Americans left the Jim Crow South seeking better lives in the Northeast, Midwest and West.  Based on family oral history and relics, “(re)collection” interprets and mythologizes the life of Young’s great-grandfather, who was among those who made the journey.

The initial version of “(re)collection” — which will include new work that Young has created specifically for the exhibition in De Pree — debuted at the Visual Arts Center of Richmond in Virginia in 2017.  In its online description, the center notes, “In an emotionally moving and exquisitely crafted exhibition, the artist brings together the hand-made wooden objects for which he is best known, along with jewelry making, printmaking and a sculptural sound installation made during his recent Quirk+VisArts residency. Both personally sourced and historically resonant, (re)collection reflects on the ways in which identity is formed through action and circumstance and transformed by archive and memory.”

Young is an assistant professor of studio arts at the University of Illinois in Chicago, and is also co-founder and director of the artist-run exhibition space The Bindery Projects, in Minneapolis. He was a 2015 Artist-in-Residence at The Fabric Workshop and Museum, and he is the recipient of the Knight Arts Challenge Fellowship from the Knight Foundation (2014); the Jerome Fellowship for Emerging Artists (2014); and the Bush Fellowship for Visual Artists (2010). He is represented by Monique Meloche Gallery, the same Chicago-based gallery that represented Amy Sherald when she was commissioned to paint the 2018 official portrait of First Lady Michelle Obama for the National Portrait Gallery in Washington, D.C.
Young received his MFA from the California Institute of the Arts in 2009 and BA from Northwestern College in Minnesota in 2004. He attended the Skowhegan School of Painting and Sculpture in 2009.