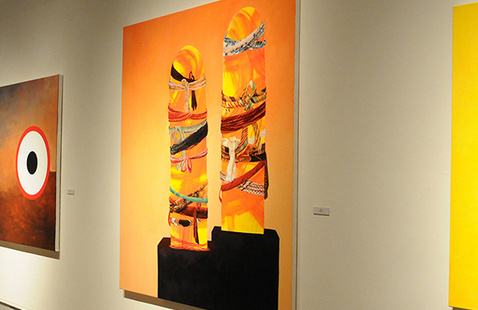 The public is invited to the exhibition, artist’s talk and reception.  Admission is free.

The exhibition will highlight work that Sullivan completed during her recent fall 2017 sabbatical. Informed by her experiences during a year working in New Delhi as a Fulbright Scholar, it will include three different but related series of paintings focusing on visual culture and painting techniques.

The first series, Docile Bodies, focuses on abstractions of the body to create new, object-like forms subject to external and internal controls real and imagined, physical and psychic. The Jamia and Darśan series juxtapose different cultural and period-specific painting methods to reflect shifting power dynamics. Through eliminating identifiable subject matter, such as portrait, landscape, or still life, the oil paintings focus on abstract aspects of different painting styles. As the relationship between background and foreground changes, different hierarchical relationships are suggested, not only between East and West, but also between color and value, line and form, and painterly and graphic technique.

Sullivan is a professor of art who has taught at Hope since 2003 and is currently serving as department chair.  The recipient of two Andrew W. Mellon grants and a Fulbright-Nehru Scholar, she has held fellowships at The Cooper Union in New York City, the Virginia Center for Creative Arts, and the Helene Wurlitzer Foundation of New Mexico. Recent solo exhibitions include Darshan|Seeing at Kendall College of Art and Design; Force Drift at Whitworth University in Spokane, Washington; and Outlier at M.F. Hussain Gallery at Jamia Millia Islamia in New Delhi. Recently, her research on color, the body and postcolonial painting has taken her to Venice, Mexico City, South Africa, India and London.

She was born in Hamilton, Ontario, Canada. She received her BFA from the University of Michigan in 1997. In 2001 she received her MFA in Painting and Drawing from Boston University, where she studied with John Walker and was the recipient of the Richard Ryan Sr. Memorial Award in 2000 and the Graduate Teaching Award in 2000-01. Additional programs of study include Chautauqua Institute, the New York Studio School and the Pennsylvania Academy of Fine Arts.

Katherine Sullivan will deliver an artist’s talk on Friday, Jan. 12, at 4 p.m. in Cook Auditorium in the De Pree Art Center and Gallery, with a reception following from 5 p.m. to 6:30 p.m.