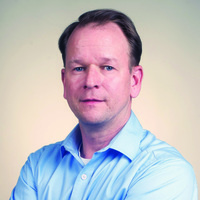 Designing complex structures can be a fairly routine task for structural engineers through the use of 3-D analysis and design programs. However, advancing those structures from a computer model to a completed structure in a safe, efficient manner can be a difficult task. We’ll review three projects which required a considerable amount of constructability review and post-design engineering to ensure success:

A proud Hope College graduate and dad to a current Hope freshman, John is currently a Principal and Senior Project Manager with Ruby and Associates Structural Engineers in Metro Detroit.  Ruby is a constructability-focused firm dedicated to serving the construction industry.  John celebrated his 25th year with the firm in 2018.

Since joining Ruby’s team in 1993, John served as leader of Ruby’s Building Design Service Sector, and has managed many of the firm’s most challenging and complex projects for healthcare, manufacturing, commercial and industrial clients.