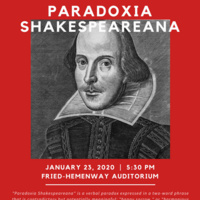 Three paradoxes about William Shakespeare’s writing will be the focus of an address at Hope College by internationally respected Shakespeare scholar Dr. John Cox, who is a retired member of the college’s English faculty, on Thursday, Jan. 23, at 5:30 p.m. in the Fried/Hemenway Auditorium of the Martha Miller Center for Global Communication.

Titled “Paradoxia Shakespeareana,” the address will explore three paradoxes that describe Shakespeare’s plays:  They are both Christian and secular, both English and universal, and both 16th-century and timeless.  Cox previously presented the lecture as the scholar-in-residence during Grand Valley State University’s Shakespeare Festival in September.  Its title honors Rosalie Colie, whose 1966 book “Paradoxia Epidemica” explored Renaissance poets’ widespread fascination with paradox as a figure of speech.

External support of his scholarship has included two highly competitive, year-long fellowships from the National Endowment for the Humanities (NEH), a summer grant from the NEH and a year-long fellowship from the Pew Evangelical Scholars Program.  His service beyond campus includes being president of the Conference on Christianity and Literature from 2004 to 2009.

At Hope, Cox served as director of Interdisciplinary Studies and the Senior Seminar program from 1984 to 2004.  He joined his wife, Karen, and their three children when she led the college’s May Term to Meiji Gakuin University in Japan in 1988.  He delivered the college’s Opening Convocation address in 2008.  He presented seminars on “Shakespeare and Christianity” and “Shakespeare’s Prayers” during the college’s annual Winter Happening event in 2008 and 2012, respectively.

Cox graduated from Hope in 1967, and completed his master’s and doctorate at the University of Chicago in 1968 and 1975, respectively.  Prior to coming to Hope, he held teaching appointments at Westmont College and the University of Victoria, and a Mellon Faculty Fellowship at Harvard University.