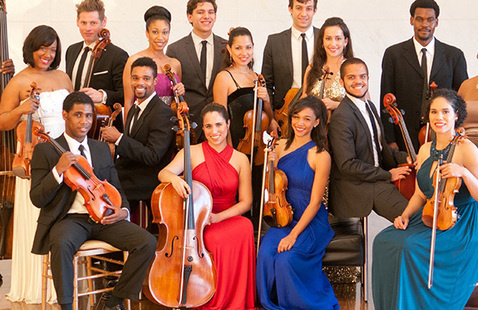 Jack H. Miller Center for Musical Arts, Concert Hall View map $22 for adults, $16 for senior citizens, and $6 for children 18 and under
Add to calendar
Save to Google Calendar Save to iCal Save to Outlook

http://www.sphinxmusic.org/sphinx-virtuosi/ #sphinxvirtuosi
View map
Add to calendar
Save to Google Calendar Save to iCal Save to Outlook

The Sphinx Virtuosi is one of the nation’s most dynamic professional chamber orchestras. The ensemble consists of 18 of the nation’s top Black and Latino classical soloists, alumni of the renowned Sphinx Competition who come together each fall as cultural ambassadors to reach new audiences.

The Chicago Critic has praised their “vibrant and energetic musicianship,” and the New York Concert Review has said that they are “brilliant, fierce, dedicated, and inspiring….,” and that their programs are “beautifully played” and “absolutely haunting.”

Aaron P. Dworkin, founder of the Sphinx Organization, was the keynote speaker for the 2016 Diversity Alliance Summit on Race and Inclusion held at Hope College.

Since its founding in 1998, the Sphinx Organization has been dedicated to transforming lives through the power of diversity in the art and has helped increase the Black and Latino members in American orchestras to 4.3 percent. In 20 years, Sphinx has reached more than 100,000 students through education programs including elementary school violin lessons, community outreach in schools, and intensive summer music camp for aspiring musicians of color ages 12-17, the Sphinx Competition for young Black and Latino string players, and more. The organization has been highlighted in several national media outlets including PBS, The Detroit News, The New York Times and CNN.

This fall’s concert tour theme, “Concerti per Venti,” pays homage to the Sphinx Organization’s 20th anniversary. The ensemble will perform a collection of concerti through the ages, showcasing a variety of styles from baroque to contemporary. The program will premiere the newly commissioned “Guardian of the Horizon: Concerto Grosso for Violin, Cello, and Strings” by award-winning composer Jimmy Lopez, along with “Delights and Dances” by Michael Abels, “Concerto Grosso” by Vaughan Williams and “Grass Fugue” by Beethoven. The Sphinx tours have reached 70 cities, 14 countries, and more than 20 million people through live and broadcast performances.

Tickets are available online at hope.edu/tickets as well as at the ticket office in the Events and Conferences Office located downtown in the Anderson-Werkman Financial Center (100 E. Eighth St.).  The ticket office is open weekdays from 9 a.m. to 5 p.m. and can be called at (616) 395-7890. Tickets are $22 for adults, $16 for senior citizens, and $6 for children 18 and under.

The Hope College Great Performance Series will feature the Sphinx Virtuosi on Friday, Oct. 20, at 7:30 p.m. in the Concert Hall of the Jack H. Miller Center for Musical Arts.