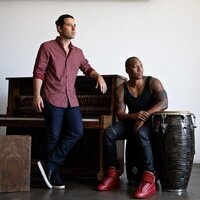 Two artists blazing new trails in Cuban jazz come together in a lively performance. With a  Grammy-nominated album of his own, percussionist Pedrito Martinez is in demand from artists ranging from Wynton Marsalis to Bruce Springsteen.

Pianist Alfredo Rodriguez brings a range of musical experiences, capturing the jazz world in at Montreux in 2006. Their first duo recording, Duologue, finds the pair exploring a range of moods and influences, from Cuban classics to collaborative original compositions to a number of unexpected favorites.

“ Alfredo Rodríguez is a figurehead of the new generation of Cuban jazz musicians who observe and honor their roots while constantly seeking new avenues for expression.” -NPR