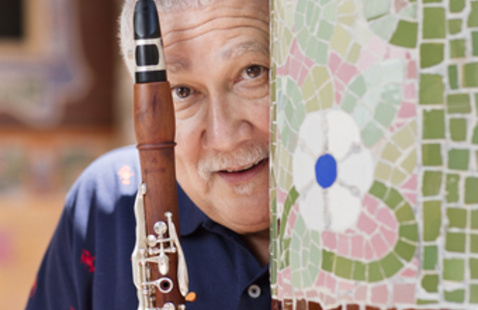 Jack H. Miller Center for Musical Arts View map Free Event
Add to calendar
Save to Google Calendar Save to iCal Save to Outlook

The Hope College Great Performance Series will feature the Paquito D’Rivera Quintet on Friday, Oct. 29, at 7:30 p.m. in the Concert Hall of the Jack H. Miller Center for Musical Arts.

While the term “legend” can get tossed around, it clearly belongs to Paquito D’Rivera. The winner of 14 Grammy Awards, he is celebrated both for his artistry in Latin jazz and his achievements as a classical composer. The Cuban-born musician made his debut at the age of 10, and by 17 was a featured soloist with the Cuban National Symphony.

He was a founding member of the Orquesta Cubana de Musica Modena and the ground-breaking group Irakere, which combined jazz, rock, classical and traditional Cuban music. His numerous recordings include more than 30 solo albums in which the multi-instrumentalist, best known for his saxophone and clarinet work, explores a range of jazz genres and classical music.

D’Rivera is also the author of two books: “My Sax Life,” published by Northwestern University Press, and a novel, “Oh, La Habana,” published by MTeditores, Barcelona. He is the recipient of the NEA Jazz Masters Award 2005 and the National Medal of the Arts 2005, as well as the Living Jazz Legend Award from the Kennedy Center, Washington, D.C., in 2007. He was named the Jazz Journalist Association’s Clarinetist of the Year Award in both 2004 and 2006.

Tickets are $24 for regular admission, $19 for senior citizens and members of the Hope College faculty and staff, and $7 for children. Admission is free for Hope College students.  Tickets are available at the Events and Conferences Office located downtown in the Anderson-Werkman Financial Center (100 E. Eighth St.). The office is open weekdays from 9 a.m. to 5 p.m. and can be called at 616-395-7890. Tickets can also be purchased online at hope.edu/tickets and will be sold at the door if available.

$24 for regular admission, $19 for senior citizens and members of the Hope College faculty and staff, and $7 for children. Admission is free for Hope College students.