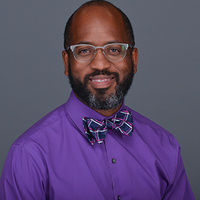 Opening Convocation speaker Dr. Gerald Griffin has been a member of the Hope faculty since 2015. He was appointed associate provost for academic affairs in 2019, and became interim provost in January 2021.

He is a neuroscientist and virologist who has several peer-reviewed publications that represent his dedication to neuroscience research and education.  He has mentored and published with more than 30 undergraduate and graduate students, and has been active in numerous science-education opportunities, including being a council member for the Faculty of Undergraduate Neuroscience.

His research interests primarily focus on the reciprocal interactions between viruses and the nervous system.  In 2019, he was named an Emerging Scholar by Diverse: Issues in Higher Education, and Hope presented him with its Janet L. Andersen Excellence in Teaching Award.  In 2016, he and his team of Hope student researchers received the college’s “Social Sciences Young Investigators Award” for investigating the normal functioning of the peptide amyloid beta, which has been found in elevated levels as a plaque in the brains of Alzheimer’s patients.  During the college’s Winter Happening event in January 2017, he presented a seminar examining research highlighting the roles of infectious agents in decreasing mental function.