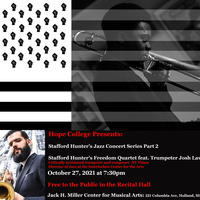 Written to commemorate the oldest nationally celebrated commemoration of the ending of slavery in the United States.

FREE to the Public

This is Stafford Hunter’s 2nd presentation of his new group Freedom Quartet. Celebrating this landmark day in American history; Juneteenth. The oldest nationally celebrated commemoration of the ending of slavery in the United States.

It was June 19, 1865 when a Union General rode into Galveston, Texas to announce that the Civil War had ended, and slaves had been freed. Of course, President Abraham Lincoln's Emancipation Proclamation was issued 2 years earlier, on January 1, 1863.

This band will perform original music related to this day in history and to the continued struggle for equality for ALL in America and worldwide. This performance of the group focuses on Stafford’s new composition "Suite Freedom". A multi-movement piece focused on many aspects of the struggle for equality, justice, and freedom for all. Be a witness. Let your voice and presence be known.

This concert will feature trumpeter Josh Lawrence; newly appointed Director of Jazz at world-renowned Interlochen Center for the Arts. Read more about Josh at: https://www.joshlawrencejazz.com/