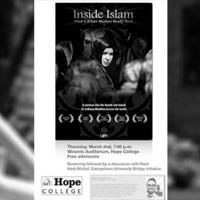 Inside Islam: What a Billion Muslims Really Think

“Inside Islam: What a Billion Muslims Really Think” explores the opinions of Muslims around the world regarding issues such as gender justice, terrorism and democracy, as reflected by tens of thousands of interviews conducted by Gallup, the preeminent polling organization, with residents in 35 predominantly Muslim nations as well as smaller populations in Europe and the United States.  Screening followed by discussion led by Dr. Nazir Harb Michel, postdoctoral senior research fellow at Georgetown University’s Bridge Initiative on the study of Islamophobia in Washington, D.C.

Screening of documentary "Inside Islam: What a Billion Muslims Really Think", followed by discussion with Islamophobia scholar Nazir Harb Michel of Georgetown University.