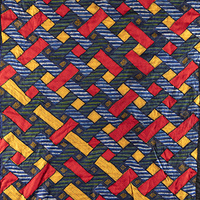 A new exhibition opening at the Hope College Kruizenga Art Museum on Friday, Jan. 17, will feature a variety of artworks made and used by the Yoruba people of Nigeria and West Africa. The exhibition, which will continue through Saturday, May 16, includes both traditional and contemporary forms of Yoruba art across a wide range of genres, from paintings and prints to sculptures, metalwork and textiles.

“Resilience, Resistance and Revival in 20th-Century Yoruba Art” examines the survival and evolution of Yoruba art and culture in Nigeria through the periods of British colonization and post-colonial independence. The artworks included in the exhibition illustrate how Yoruba art has been shaped by the twin forces of continuity and change through the 20th and into the 21st centuries.

The Yoruba are one of the largest ethnic groups in West Africa, numbering more than 40 million people. Most Yoruba live in southwestern Nigeria, where from the 12th to 18th centuries the Yoruba kingdoms of Ife and Oyo ranked among the most powerful states in West Africa. In the 19th century, a series of civil wars and conflicts with neighboring ethnic groups left the Yoruba vulnerable to invasion and colonization by European powers. Yoruba lands and people largely came under the power of Great Britain, and British rule affected every aspect of Yoruba society and culture. In the arts, the diminished power and wealth of Yoruba rulers, the conversion of many Yoruba to Christianity and Islam, and the introduction of foreign manufactured goods all served to undermine the demand for and traditions associated with both secular and religious Yoruba art. However, despite the negative effects of colonization, Yoruba art endured and contributed to an increasing sense of Yoruba ethnic pride during the colonial period.

Nigeria gained independence from Britain in 1960, and in the post-colonial state art performed a new role for the Yoruba people. Faced with competition from other Nigerian ethnic groups for power and resources, art became a means to preserve and promote Yoruba identity and culture. The exhibition includes works from a series of distinctly Yoruba art movements that emerged between the 1960s and 1990s, the collective success of which ensured that Yoruba culture remains vibrant and relevant in Nigeria and the rest of the world to this day.

“The groundwork for this entire exhibition was laid by four undergraduate students led by Professor Heath,” explained Charles Mason, who is the director and Margaret Feldmann Kruizenga Curator of the Kruizenga Art Museum. “The students did an extraordinary job conducting original research on many of the artworks in the exhibition and figuring out a coherent installation narrative. This is exactly the type of hands-on, experiential learning the Kruizenga Museum was created to provide.”

The exhibition has also been supported by key gifts and loans from several Hope College alumni and other museum supporters, including Dr. Bruce and Ann Haight of Grand Rapids; Mary Vande Poel ’59 of Zeeland; Leif Jacobsen ‘60 of Sarasota, Florida; Dr. Neal ‘68 and Elizabeth Sobania of Lakewood, Washington; and Yorgo and Kelly Demtrakopoulos of Kalamazoo.

Admission to the Kruizenga Art Museum is always free. Public visiting hours are Tuesdays through Saturdays from 10 a.m. to 4 p.m.  Please check the museum’s website  or social media for additional information about special programs and events related to “Resilience, Resistance and Revival in 20th-Century Yoruba Art.”

The museum functions as an educational resource for Hope College and the greater West Michigan community. The museum features two public galleries as well as a classroom and climate-controlled storage space for its 4,500-object permanent collection. It is named in honor of a leadership gift from Dr. Richard and the late Margaret Kruizenga of Holland, both of whom graduated from Hope in 1952.