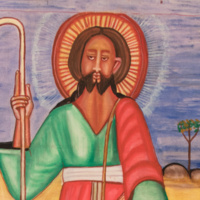 A new exhibition opening at the Hope College Kruizenga Art Museum on Friday, Sept. 21, explores the beliefs and practices of the Ethiopian Orthodox Church as they are reflected in contemporary paintings, icons, liturgical objects and other works of art.

The 67 artworks in the exhibition were collected and donated to the Kruizenga Art Museum by Dr. Neal Sobania, a Hope alumnus from the Class of 1968 who was a Peace Corps volunteer in Ethiopia and later went on to make Eastern Africa the focus of his academic career. The exhibition will continue through Saturday, Dec. 15.

Located in the Horn of Africa on the eastern side of the continent, Ethiopia is home to a vibrant Christian culture dating back to the early fourth century CE, long before the arrival of any missionaries from Europe or America,” said exhibition curator Charles Mason, who is the director of the Kruizenga Art Museum as well as the Margaret Feldmann Kruizenga Curator of the museum. “Many Westerners whose knowledge of Ethiopia has been shaped primarily by images of famine, war, and long-distance runners winning races are surprised to learn that Ethiopia possesses a rich tradition of Christian art that has been integral to the life of the church in that country for nearly 17 centuries. This ancient tradition of Christian art continues to exert a powerful influence in Ethiopia today and is reflected in many of the artworks included in this exhibition.”

According to Mason, most contemporary Ethiopian Orthodox Christian art is made, as it was in past centuries, by deacons, priests, monks and other artists with significant religious training. In Ethiopia, religious art is used mainly in churches and monasteries to assist in the performance of public services and private devotions, to decorate buildings and to provide religious instruction. Some contemporary Ethiopian Orthodox Christian art is also made for sale to tourists and collectors, as well as for Ethiopian churches serving Diaspora communities overseas.

The distinction between art made for use in the church and art made for the marketplace is not always clear, as Mason explained. “Many religious artworks could fall into either category depending on who makes them, who acquires them and how they are used,” he said.  “Art made for the church must follow certain traditions governing subject and style and is not considered to have true spiritual power until it is approved and blessed by a priest or monk. Art made for the commercial market often follows the same stylistic conventions as church art, but it may be more innovative in form and subject matter and is generally considered to be decorative rather than sacred.”

The artworks featured in the exhibition were collected and donated by Neal Sobania and his wife, Elizabeth, of Lakewood, Washington. After graduating from Hope College in 1968, Neal Sobania joined the Peace Corps and served for four years in Ethiopia. A few years later he lived and worked in Kenya doing graduate research and working for the United Nations Environmental Program. He continued to develop his interest in those countries during and after graduate school and has made Eastern Africa the focus of his academic career for more than fifty years.

Although Sobania has always enjoyed collecting things, the formation of his African art collection was more accidental than deliberate, at least at the beginning. “As a youth I was introduced to collecting — stamps, marbles, baseball cards. On family vacations I added postcards of historical sites. By college most kids have left this sort of thing behind. However, while in Czechoslovakia with Hope College I was given a woodcut of the Charles Bridge, and my fervor for collecting was reignited. After graduation, while serving as a U.S. Peace Corps volunteer in Ethiopia, followed by research and work in Kenya, I found myself surrounded by distinctive and exceptional objects. There was never a goal of actually becoming a collector; that was simply the unintended result of a desire to learn more about where I was living and to discover what insight objects of material culture might add to my understanding of the people among whom I was conducting research.”

As Sobania’s career progressed, he became more intentional about his collecting and focused on acquiring works by artists who are recognized and respected by the communities in which they live. He acquired much of the art featured in the exhibition in the holy city of Aksum, in northern Ethiopia. Home to the Church of Our Lady Mary of Zion, the spiritual headquarters of the Ethiopian Orthodox Church, Aksum has long been a vital center for the production of Ethiopian religious art. By visiting Aksum repeatedly over a period of more than three decades, Sobania formed strong relationships with many artists and shopkeepers and was able to assemble a collection of rare quality and depth.

Sobania was director of international education and a member of the history faculty at Hope from 1981 to 2005.  He was subsequently at Pacific Lutheran University, where he was executive director of the Wang Center for Global Education and a professor of history, retiring in 2016.

Sobania will deliver a public lecture about his collection and the exhibition on Friday, Sept. 21, at 4 p.m. in the Fried-Hemenway Auditorium in the Martha Miller Center for Global Communication on the Hope College campus. The lecture will be followed by a reception at the Kruizenga Art Museum from 5:30 p.m. to 7 p.m. On Saturday, Sept. 22, at 2 p.m. Ethiopian-born artist and 2003 Hope alumnus Daniel Berhanemeskel will speak at the Kruizenga Art Museum about traditional Ethiopian painting materials, techniques and styles.

Admission to both lectures, the reception and the exhibition is free, and all are welcome. The exhibition will be accompanied by a fully illustrated digital catalog that can be downloaded free of charge from the Kruizenga Museum website as soon as the exhibition opens.

The museum, which is open Tuesdays through Saturdays from 10 a.m. to 4 p.m., functions as an educational resource for Hope College and the greater West Michigan community. The museum features two public galleries as well as a classroom and climate-controlled storage space for its 3,000-object permanent collection. It is named in honor of a leadership gift from Dr. Richard and the late Margaret Kruizenga of Holland, both of whom graduated from Hope in 1952.  Additional information is available at hope.edu/kam.

Image: "Jesus and His Apostles Went Up the Mountain" (detail) by Qes Adamu Tesfaw