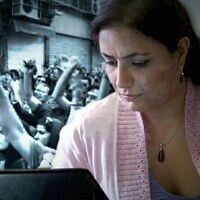 Their voices are suppressed, prohibited and censored. But world-famous bloggers Yoani Sanchez, Zeng Jinyan, and Farnaz Seifi are unafraid of their dictatorial regimes. These fearless women represent a new, networked generation of modern rebels. In Cuba, China, and Iran their blogs shake the foundations of the state information monopoly, putting them at great risk.

Tracing each woman's use of social media to denounce and combat violations of human rights and free speech in her home country, FORBIDDEN VOICES attests to the Internet's potential for building international awareness and political pressure.

This screening of FORBIDDEN VOICES at the Knickerbocker Theater in downtown Holland is part of the annual NEA Big Read Lakeshore and hosted by Markets & Morality. Markets & Morality is a student organization at Hope College that aims to support and celebrate freedom of expression in the context of the liberals arts, by hosting speakers and films on topics spanning the economic, political, and cultural aspects of human civilization, with a special concern for human flourishing as understood in Christian perspective.

This film screening is also cosponsored by Asian Studies, the Center for Global Engagement, the Global Studies Program, Phelps Scholars, the Department of Political Science, the Religion Department, and Women's and Gender Studies.

Admission to this event is free and open to the public. For more information on this event, please email estelle@hope.edu.