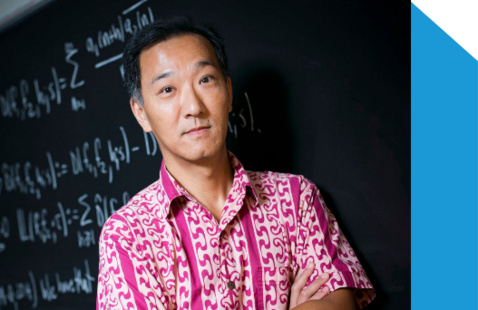 VanderWerf Hall, 102 View map
Add to calendar
Save to Google Calendar Save to iCal Save to Outlook

"Arithmetic and Geometric Means form Jellyfish Swarms of Curves" by Ken Ono
Classical work of Euler and Gauss on "Arithmetic and Geometric Means” (AGM) produces wonderful rapidly convergent sequences with common limit. Euler’s famous formula for pi is an extraordinary example. Here the speaker will introduce the AGM for finite fields, where finite directed graphs are spawned in lieu of infinite sequences. The collection of these graphs reminds one of a jellyfish swarm, as the 3D renderings of the connected components resemble jellyfish (i.e., tentacles connected to a bell head). These swarms turn out to be more than the stuff of child’s play; they are taxonomical devices in number theory. Each jellyfish is an isogeny graph of elliptic curves, and this interpretation gives a striking description of Gauss's class numbers as counts of spots on these jellyfish.

About the Speaker
Ken Ono is the Thomas Jefferson Professor of Mathematics at the University of Virginia and the Chair of Mathematics at the American Association for the Advancement of Science. He has published over 200 research articles in number theory. Professor Ono has received many awards for his research, including a Guggenheim Fellowship, a Packard Fellowship and a Sloan Fellowship. He was awarded a Presidential Early Career Award for Science and Engineering (PECASE) by Bill Clinton in 2000, and he was named the National Science Foundation's Distinguished Teaching Scholar in 2005. He was an associate producer of the 2016 Hollywood film The Man Who Knew Infinity, which starred Jeremy Irons and Dev Patel. Earlier this year he put his math skills to work in a Super Bowl week commercial for Miller Lite beer.