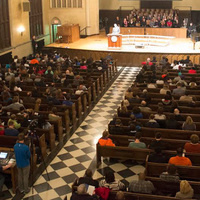 Paul is a 2010 Hope graduate who is an M.D./M.S. candidate and Academic Research Track Fellow at the University of Rochester School of Medicine and Dentistry.  He is actively engaged in several initiatives to increase the number of compassionate and culturally competent physicians from underrepresented backgrounds who are dedicated to serving in their communities.  He has received national recognition as both a researcher and for his commitment to service.

In his address, he will examine King’s early life and career, focusing on King’s example in leading courageously against injustice even when his own life was threatened.  He will additionally reflect on his own experiences in encouraging those in the audience—especially students—to discern how they can apply their own gifts in meeting needs in the world.

A native of Grand Rapids, Paul graduated from Hope with a chemistry major.  While at Hope, he served as student body president during the 2008-09 academic year.  He conducted biophysics research in the laboratory of Dr. Brent P. Krueger and was awarded a Cyberinfrastructure Experiences for Graduate Students (NIH-CIEG) Fellowship to study under Dr. Ross Walker at the San Diego Supercomputer Center-University of California, San Diego.

He began his studies at the University of Rochester School of Medicine and Dentistry in August 2010, and matriculated into the Academic Research Track Honors Program in Neurobiology and Anatomy in 2013.

During his Academic Research Track fellowship, he chaired the fourth Annual Student National Medical Association pre-medical conference, which attracted more than 200 educators, clinicians and underrepresented students from area high schools, colleges and medical schools—exposing the students to careers in medicine.  Using the conference as a model, he also co-founded the Minority Male Leadership Association in response to the nine-percent four-year high school graduation rate of minority students in Rochester, New York.

Paul’s academic interest is in neuroscience.  More specifically, he studies how the brain heals itself after injury from strokes, traumatic brain injuries and brain tumors.

Recently, his work was featured as the cover article for the December 2014 issue of “Science,” and he has appeared on the NPR-affiliate radio show, “Connections,” as a “Notable scientist under the age of 30.”  During his research tenure, he has also helped several minority undergraduate students obtain competitive summer research funding and subsequent acceptance into medical schools across the country.

Earlier this fall, he received The William and Charlotte Cadbury Award from the National Medical Fellowships and Association of American Medical Colleges, presented annually to a senior medical student in recognition of outstanding academic achievement, leadership and community service.  Upon graduation, he will begin his medical career as a resident physician in neurosurgery.

Paul’s presentation is sponsored by Herman Miller Inc. and the college’s Office of Multicultural Education and multicultural student organizations, and is taking place as part of the college’s annual Civil Rights Celebration week.  The week, running Monday-Saturday, Jan. 18-23, this year, honors all persons and groups who have worked toward the advancement of civil rights and social justice, and is organized in conjunction with the national commemoration of the life of Dr. Martin Luther King Jr.  The week will include a variety of additional activities for the campus community, including a panel discussion by leaders of multicultural student organizations on Thursday, Jan. 21, from 4 p.m. to 5 p.m. in the Maas Center and a special “Time to Serve” opportunity for students at multiple community locations on Saturday, Jan. 23.