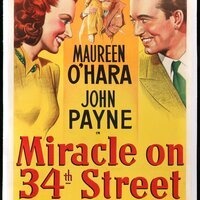 Miracle on 34th St. | One Night Only Series

The series will conclude with a chance to see a Christmas classic on the big screen as O’Hara stars in “Miracle on 34th Street” on Monday, Dec. 13. The film also stars John Payne, an 8-year-old Natalie Wood in her first major role and Edmund Gwenn in his Santa-defining role. The film looks at the impact of a department-store Santa Claus, who claims to be the real Santa, on those he encounters. O’Hara is a divorced mother who raises her daughter with no “fairy tales,” but when Santa moves in with their neighboring lawyer who is defending him, she is forced to reconsider her no-nonsense approach to life. The film won three Academy Awards.