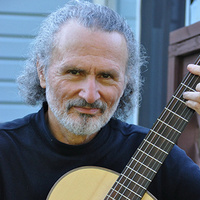 Classical guitarist Paul Vondiziano will perform at Hope College on Friday, Feb. 28, at 7:30 p.m. in the John and Dede Howard Recital Hall of the Jack H. Miller Center for Musical Arts.

Evert Lutz, a music critic from the Netherlands, has called Vondiziano “an aristocrat among guitarists,” while Gerald Elliot of the Grand Rapids Press has called him “a superb guitarist…  a sensitive musician in full command of his instrument.”

Vondiziano has performed at Hope College several times, including solo concerts and in conjunction with other artists. Vondiziano was born in Larnaca, Cyprus, where he began his study of the guitar at age eight. Following his studies in the United States, he returned to Cyprus, where his performance activities led to further engagements and tours in Europe. Since his return to America, he has been active as a performer and continues to make appearances abroad. He has premiered works for guitar such as his own “Memories of Inner Time” and “Triptych,” as well as Will Bottje’s “Lighter Strings” for guitar and harpsichord and “Greetings” suite for solo guitar.

He has collaborated with various musicians and ensembles and has performed as a concerto soloist with ensembles such as the Cyprus National Chamber Orchestra, the Boise Philharmonic, Kalamazoo Symphony, Plymouth Symphony and various university-related orchestras. He has also participated in ensembles such as Opera Grand Rapids (in productions of “The Fall of the House of Usher” by Philip Glass) and Greek Music Groups. Other collaborations include a guitar-harpsichord duo with Susan Lawrence from the Gilmore Keyboard Festival. He has been featured both in performance and interview formats on Cyprus National Television and Radio, Swedish Radio, public radio stations in the U.S. and CBC Radio in Canada.

Tickets for the concert are $10 for regular admission, $7 for senior citizens and Hope faculty and staff, and $5 for students 18 and under. Tickets are available online as well as at the ticket office in the Events and Conferences Office located downtown in the Anderson-Werkman Financial Center (100 E. Eighth St.). The ticket office is open weekdays from 9 a.m. to 5 p.m. and can be called at 616-395-7890.

The Jack H. Miller Center for Musical Arts is located at 221 Columbia Ave., on Columbia Ave. between Ninth and 10th streets.

$10 for regular admission, $7 for senior citizens and Hope faculty and staff, and $5 for students 18 and under