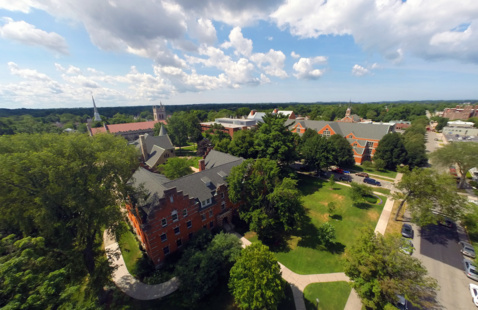 “Ghostly molecules and the Droste effect”  by Matthew Eiles ‘13

Upon absorbing a photon of a few electron volts, an atom becomes excited and flings one of its valence electrons out into a distant orbit. This electron can travel so far from the ionic core that, in a sufficiently dense atomic cloud, it can encounter another atom. Under certain conditions, these two atoms - one in an excited Rydberg state, one in its ground state - can bind together to form a long-range Rydberg molecule. This type of molecule has a number of exotic properties and has, since its prediction just over twenty years ago, been the subject of intense theoretical and experimental study. In this talk I will discuss why this molecule has been so actively studied and present the results of some of my own investigations. I will focus on two aspects in particular. First, I will show how one can use Rydberg molecules to study the elusive Droste effect. Second, keeping with the timely scheduling of this talk, I will show how a Rydberg atom can be manipulated so that it forms a ghostly chemical bond not within another ground state atom, but with a completely empty point in space.

Matt graduated from Hope in 2013 with a B.S. in Physics and Math, and then began a Ph.D program in physics at Purdue University in the autumn. There, with his supervisor Prof. Chris Greene, he studied the physics of highly excited atoms and negative ions, and defended his dissertation in 2018. For his thesis work, he received the Raman prize from Purdue and was a finalist for the APS Deborah Jin Thesis award.  He then moved to Dresden, Germany, to do a postdoc under the supervision of Prof. Dr. Jan Michael Rost at the Max Planck Institute for the Physics of Complex Systems. There he received an Alexander von Humboldt fellowship to extend his postdoc, and was also awarded a distinguished PKS postdoc position in July 2020. From January 2021 until the present he has been a group leader at the same institute. His group is titled “Correlations and transport in Rydberg matter” and continues his research into highly excited and strongly interacting systems at ultracold temperatures.