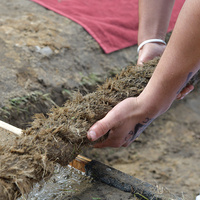 Due to high water levels at the Pull's traditional home on the Black River because of Lake Michigan’s near-record highs, this year’s installment of the 122-year freshman-sophomore contest will takes place along the south side of 11th Street between Lincoln and Fairbanks avenues.

11th Street will be closed between Lincoln and Fairbanks due to the Pull, although there will still be access to the DeVos Fieldhouse parking lots along 11th, which will be available for public use.  There will be no parking on the south side of 11th Street along the Pull site.

The Hope College Pull tug-of-war, a 122-year tradition, will be held on Saturday, Sept. 28, at 3 p.m. on 11th Street between Lincoln and Fairbanks avenues.

The Pull, first held in 1898, is an annual fall highlight at Hope. In the competition, freshman and sophomore teams, entrenched in shallow pits on opposite sides of the river, attempt to gain the most rope through their strength and stamina.

Each team has 18 students on the rope as “pullers” and another 18 acting as guides and morale boosters, or “moralers.” The freshmen are coached by the junior class while the sophomores are instructed by the seniors. The coaching arrangement also leads to a rivalry between the even-year and odd-year classes.

.In 1977, the Pull set a record for length and uniqueness. The freshmen and sophomores tugged for three hours and 51 minutes before judges called a tie due to darkness. In contrast, the shortest Pull lasted two minutes and 40 seconds in 1956.

New rules were implemented in 1978, following the 1977 marathon, limiting the event’s duration. The rules now allow the judges to determine the winning class by measuring the amount of rope pulled from the other team if one team has not claimed all of the rope within three hours.

There have been four draws and four cancellations since 1909.

Directions to the event and more information are available online at:hope.edu/offices/student-life/pull/