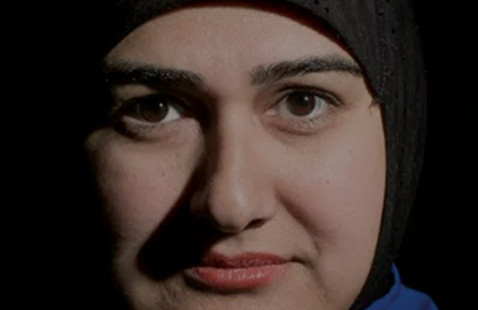 Jack H. Miller Center for Musical Arts, John and Dede Howard Recital Hall View map
Add to calendar
Save to Google Calendar Save to iCal Save to Outlook

Hope College Theatre will host award-winning playwright, actor and solo-performance artist Rohina Malik for two presentations on Monday and Tuesday, April 4 and 5, that explore the experience of Muslim women.

The public is invited to both events. Admission is free.

“Unveiled” sees Malik performing as four Muslim women who serve tea and learn what lies beneath the veil with themes and topics in their lives including:  racism, hate crimes, love, Islam, culture and language. “The Hijabis” follows three best friends in their mid-20s living in a small town who find that life after college isn’t what they expected, but throughout their struggles are united by their love for ice cream, their penchant for laughter and their commitment to wearing their hijabs as a reflection of their faithfulness to God.

“We are delighted to bring Rohina Malik to our campus and give our students and community an opportunity to hear her unique voice,” said Michelle Bombe, professor of theatre and department chair. “We have participated in the Big Bridge Consortium for three play developments, and this is the second opportunity we have had to bring a playwright to campus. Her work is a dynamic complement to the theatrical offerings of our department season and in the Many Voices Project.  We are fortunate to include her in our series.”

The Big Bridge Theatre Consortium is a consortium of university theatre departments across the country committed to developing new plays dedicated to peace and interfaith dialogue.  The department had previously presented Arlene Hutton’s play “The Shakers of Mt. Lebanon Will Hold a Peace Conference This Month” in November 2019.

Malik was born and raised in London, England, of South Asian heritage.   Her acclaimed one-woman play “Unveiled” has been produced at theaters across the country.  Rohina’s plays “The Mecca Tales” and “Yasmina’s Necklace” were both nominated for Joseph Jefferson Awards for Best New Play.

She was selected to receive the 2018 Lee Reynolds Award, given annually to a woman active in any aspect of theatre whose work has helped to illuminate the possibilities for social, cultural, or political change.

Malik’s performances and residency are sponsored by Hope Theatre, The Big Bridge Consortium, The Many Voices Project, Patrons for the Arts, Cultural Affairs, Center for Diversity and Inclusion, Department of English and Department of Religion.