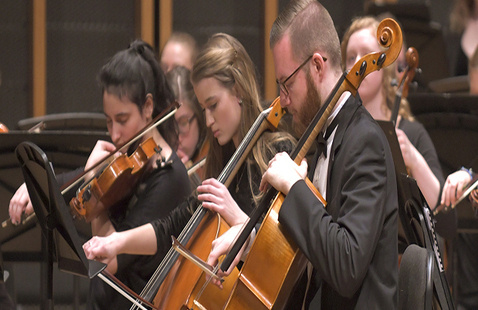 Jack H. Miller Center for Musical Arts, Concert Hall View map $10
Add to calendar
Save to Google Calendar Save to iCal Save to Outlook

Hope College will present its 32nd Annual Musical Showcase on Friday, Jan. 31, at 7:30 p.m. in the Concert Hall of the Jack H. Miller Center for Musical Arts.

Hope College students take the stage for this fast-paced, musical spectacular, during which audience members hear everything from opera to jazz. The hardest part for those attending is containing their enthusiasm, at least at first. In the tradition of the quick-moving musical event, audience members are asked to hold their applause until intermission and the end of the performance.

The Chapel Choir will perform a piece, followed by Victoria Spring, soprano, singing “Quando men vo,” by Giacamo Puccini. The last piece before intermission, “Strange Humors,” by John Mackey, will be performed by the Wind Ensemble.

After intermission, Deborah Blackmon, piano, and Daniel Tague, piano, will play “Variations on a Theme by Paganini,” by Witold Lutoslawski. Timothy Nechuta, organ, will play “Trio Sonata,” by J.S. Bach, and the Jazz Arts Collective will play “Bebop,” by Dizzy Gillespie. “Dreaming,” by Lori Laitman, will be performed by Mia Van Erp, soprano, and Janice Faber, piano. Bethany Dame, organ, will play “Chromatique” from “Sept etudes pour pedale seule,” by Jean Lankglais. Sannan Cheng, piano, will perform “Barcarolle,” by Gabriel Fauré, and closing the concert will be the orchestra performing “An American in Paris Suite,” by George Gershwin.