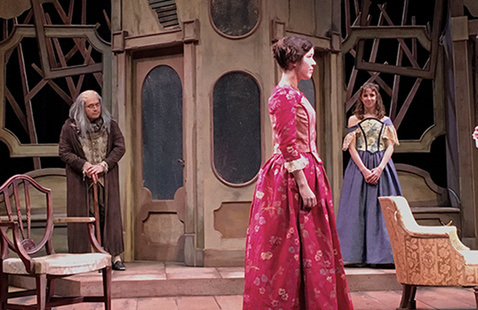 DeWitt Student and Cultural Center, Main Theatre View map Free Event
Add to calendar
Save to Google Calendar Save to iCal Save to Outlook

Moliere’s French neoclassical comedy “The Miser” tells the story of penny-pinching Harpagon, a man who loves nothing more than his beloved cash box - not even his own children. His son, Cleante, falls head over heels for a young girl named Mariane, while his daughter Elise finds her own love in Valere, the young man who saved her from drowning. Valere poses as Harpagon’s steward and will stop at nothing to convince Harpagon that he is the right man for Elise. Tensions rise when Cleante discovers that his father has also been struck by the beauty of young Mariane. With love on their minds, no one seems to notice when Harpagon’s cash box suddenly goes missing. With a bit of manipulation, quick wit and comedy, Moliere’s timeless piece explores the humorous and ultimately isolating impact greed can have on an individual.

Director Daina Robins is excited to bring the work of Moliere to the Hope stage.

“Moliere's ‘The Miser’ is a classic comedy about young love, foolish fathers, clever servants, disguises and mistaken identities,” Robins said. “We are having great fun exploring these time-honored comic conventions and characters while also working to discover the contemporary relevance of the play.  As the title indicates, money is a central point of contention and concern in the play — and I would suggest that American culture also manifests quite a strong preoccupation with money, its status, its significance, its necessity, its ruling power in our society.”

Tickets for the evening performances are $10 for regular admission, and $7 for senior citizens, Hope faculty and staff. Tickets are free for Hope College students and children 18 and under, and are available at the Events and Conferences Office located downtown in the Anderson-Werkman Financial Center (100 E. Eighth St.).

No tickets are required for the matinee on Sunday, Nov. 19.

The Hope College Department of Theatre will present “The Miser” on Friday and Saturday, Nov. 17 and 18, and Wednesday-Friday, Nov. 29-Dec. 1, at 7:30 p.m. with an additional free matinee on Sunday, Nov. 19, at 3 p.m.  All performances will be in the DeWitt Center main theatre.