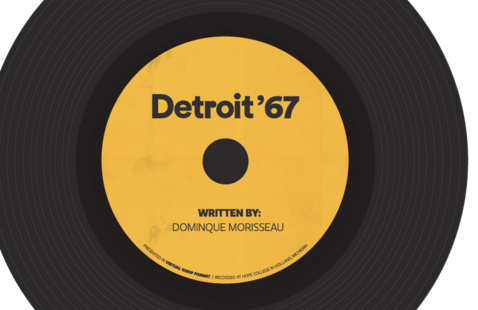 The Department of Theatre at Hope College will present six performances of “Detroit ’67” via livestream between Friday, Feb. 26, and Saturday, March 6.

Virtual tickets are free and open to all but pre-registration is required via tickets.hope.edu. Out of an abundance of caution due to the ongoing global COVID-19 pandemic, there will be no in-person audience.

“Detroit ’67” was written by Dominique Morisseau in 2013.  As described by its publisher, “In 1967 Detroit, Motown music is getting the party started, and Chelle and her brother Lank are making ends meet by turning their basement into an after-hours joint. But when a mysterious woman finds her way into their lives, the siblings clash over much more than the family business.” The racial tensions on the streets of the city serve as the play's socio-political context and backdrop for the action.

The Hope production’s director, Richard Perez, noted that he feels a connection to the play.  “I wanted to direct ‘Detroit ’67’ because I am dedicated to theatrical work that pays tribute to and honors the people in our society who have been silenced or detrimentally maligned,” said Perez, an assistant professor of theatre.  “As a Mexican American who grew up in an urban area often portrayed negatively in the media, I feel a special kinship with the people of Detroit. We love where we come from and are disheartened by the negative misconceptions continuously perpetuated about our communities.

“I was also struck by how timely ‘Detroit ’67’ is,” he said.  “While the play takes place over 50 years ago, our communities are still being ravaged by the repercussions of racial inequality and injustice. When people constantly suffer from being denied the opportunities promised by our forefathers, the powder keg of uprising is inevitable.”

Updates about the production are available through the Department of Theatre’s social media (Hope College Theatre Department on Facebook; @hopetheatredept on Instagram).