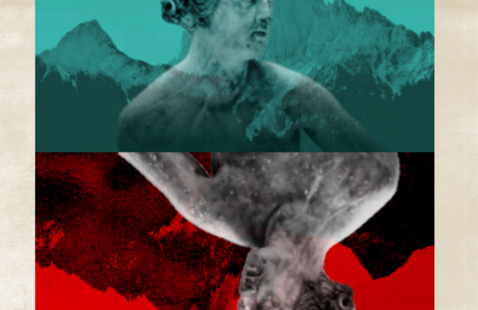 The Department of Theatre at Hope College will present Sarah Ruhl’s “Eurydice” on Friday-Sunday, Nov. 12-14, and Thursday-Saturday, Nov. 18-20, in the main theatre in the DeWitt Student and Cultural Center.

Directed by Dr. Daina Robins, professor of theatre at Hope, “Eurydice” by Sarah Ruhl reimagines the classic myth of Orpheus through the eyes of its heroine. Dying too young on her wedding day, Eurydice must journey to the underworld, where she reunites with her father and struggles to remember her lost love. With contemporary characters, ingenious plot twists and breathtaking visual effects, the play is a fresh look at a timeless love story.

As Robins states, “I have consistently been drawn to modern adaptations of Greek myths.  The stakes and urgency of those old stories seem to attract the ‘high drama’ side of me, yet more modern contexts and variations on mythic themes can often speak more directly to today’s audience.  Sarah Ruhl’s play does that for me.  She returns to the compelling narrative of Eurydice and Orpheus and then adds her own particular take on the story with a fabulous mixture of poetic language, theatrical imagery, everyday conversation and contemporary perspective.”

“Eurydice” had its world premiere at Madison Repertory Theatre, Madison, Wisconsin, on September 2003. It was next produced at the Berkeley Repertory Theatre in California in 2004. The play opened in New York at the Off-Broadway Theatre, Second Stage, and ran from June 18 to August 26, 2007. The production received several award nominations, including the 2008 Drama League Award for Distinguished Production of a Play, and the 2008 Drama Desk Award for Outstanding Set Design of a Play. Charles Isherwood when reviewing the New York production called it a “weird and wonderful new play.”

“Eurydice” has been produced by hundreds of high schools and universities around the world.

Tickets are $10 for regular admission; $7 for senior citizens and Hope faculty and staff; and free for Hope College students and students ages 18 and under. Tickets are available at the Events and Conferences Office located in downtown Holland in the Anderson-Werkman Financial Center (100 E. Eighth St.). The ticket office is open weekdays from 9 a.m. to 5 p.m. and can be reached at 616-395-7890. Tickets can also be purchased online at hope.edu/tickets and will be sold at the door if available.

$10 for regular admission; $7 for senior citizens and Hope faculty and staff; and free for Hope College students and students ages 18 and under