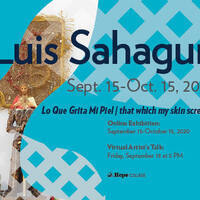 Luis Sahagun was born in Guadalajara, Jalisco, Mexico in 1982. His grandfather came to the United States in the 1940s under the Bracero Program, working in Chicago Height’s steel industry. Sahagun’s father found field work in the late 1970s, and Luis was brought to this country in 1985, living undocumented until he was naturalized in 1995 under Ronald Reagan’s Immigration Reform and Control Act of 1986. Sahagun, a 2001 graduate of Chicago Height’s Bloom High School, earned his BFA from Southern Illinois University in 2006 and his MFA in painting from Northern Illinois University in 2015.