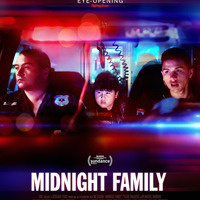 A documentary film from Mexico that captured numerous fans at the Sundance Film Festival, “Midnight Family,” will run on Monday-Saturday, Feb. 3-8. In Mexico City, the government operates fewer than 45 emergency ambulances for a population of nine million. This has spawned an underground industry of for-profit ambulances often run by people with little or no training or certification. An exception in this ethically fraught, cutthroat industry, the members of the Ochoa family struggle to keep their financial needs from jeopardizing the people in their care. When a crackdown by corrupt police pushes the family into greater hardship, they face increasing moral dilemmas even as they continue providing essential emergency medical services.  Manohla Dargis of The New York Times has said, “By turns terrifying and exhilarating, ‘Midnight Family’ unfolds with such velocity that it may take a while for your ethical doubts to catch up to what’s happening. When they do, they leave you gasping” and Variety has called it “a gripping doc.” The film has been nominated for more than 40 international awards and has won 20 awards from a variety of film festivals. The film is in Spanish with English subtitles.

$7 for regular admission and $6 for senior citizens, Hope College faculty and children, and will be sold at the door.