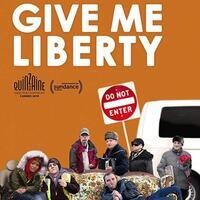 Winter Film Series - Give Me Liberty

“Give Me Liberty,” showing Monday-Saturday, Jan. 13-18, is an American comedy written and directed by Russian émigré Kirill Mikhanovsky. Medical transport driver Vic (Chris Galust) risks his job to shuttle his Russian grandfather, other seniors and a Russian boxer to a funeral. When a protest disrupts the route, he drags regular clients like Tracy (Lauren “Lolo” Spencer) a young woman with ALS, along for a freewheeling ride. The award-winning film has been called “a wild and ultimately joyous ride” by the Hollywood Reporter, while Nick Allen of RogerEbert.com has said that it is the “debut of a fresh vision of the all-American crowd-pleaser.”

$7 for regular admission and $6 for senior citizens, Hope College faculty and children, and will be sold at the door.